Pecan bacterial leaf scorch is common throughout the pecan-producing areas of the southeastern United States. In 2015, this disease was also found in the western pecan-producing states of Arizona, California, and New Mexico (Hinton et al. 2015). It is also known to occur in Texas.

Pecan bacterial leaf scorch causes defoliation, reduces tree growth (particularly when trees are infected at an early age), and reduces kernel weight. While these factors make this disease unsightly for a homeowner with a few pecan trees, they can have a significant economic impact for a commercial pecan producer. There are no economically effective treatments to eliminate the pathogen from an infected tree. Although pecan bacterial leaf scorch does not kill pecan trees, yield and economic losses can occur.

Pecan bacterial leaf scorch has been identified in over 30 cultivars as well as in native and seedling trees. Susceptibility varies across cultivar, and in mixed plantings, disease tends to occur in and spread to the most susceptible cultivars first. While pecan bacterial leaf scorch tends to occur less often in some cultivars than others, no resistant cultivars have been identified. Table 1 shows a list of cultivars in which this disease has been identified in naturally infected orchard trees or in test trees resulting from mechanical (needle) inoculation with the pathogen. Additionally, seedlings of the pecan cultivars or selections Apache, Curtis, Elliot, Moore, Riverside, Stuart, and VC1-68 that are used as rootstocks were also able to be infected with the pathogen and develop disease following mechanical (needle) inoculation (Sanderlin 2015).

3Pecan bacterial leaf scorch identified in seedlings of these cultivars; disease occurred as a result of mechanical (needle) inoculation with the pathogen (Sanderlin 2005).

4Trees of these cultivars in Arizona or New Mexico tested positive for the pecan bacterial leaf scorch pathogen (Goldberg 2015).

Symptoms of pecan bacterial leaf scorch typically appear from late spring into fall and typically increase in intensity during the summer. The leaflets turn tan to brown at the tips with discoloration and tissue desiccation that progress toward the base of the leaflet (Figure 1A). One or more leaflets on a compound leaf may exhibit these symptoms, and, sometimes, leaflets on only one side of the rachis (leaf stem) may exhibit these symptoms. In time, symptomatic leaflets will fall (abscise) from the rachis, leaving a bare rachis attached to the branch (Figure 1B). Eventually, the empty rachis will also abscise from the tree. 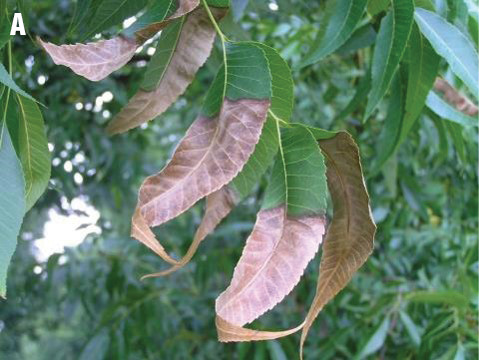 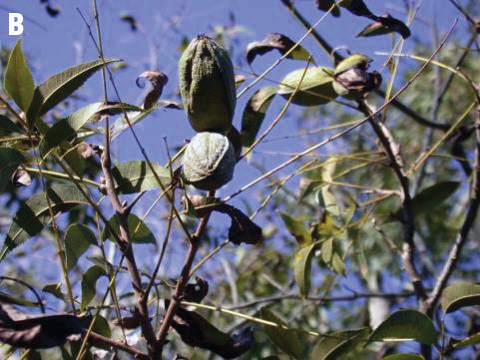 Figure 1. Symptoms of pecan bacterial leaf scorch. A) Tan to brown leaflet discoloration and tissue desiccation begins at the tips of the leaflets and progresses toward their bases. B) Bare rachises remain attached to the tree for a period of time after symptomatic leaflets abscise. Photos (modified): R. A. Melanson and R. S. Sanderlin (2015).

Symptoms of new infections in mature trees often appear near the tops of trees in new growth. Depending on the extent of the infection, symptoms may be observed on only one or a few limbs of a tree or throughout the entire tree (Figure 2). Symptoms are typically expressed every year in an infected tree. 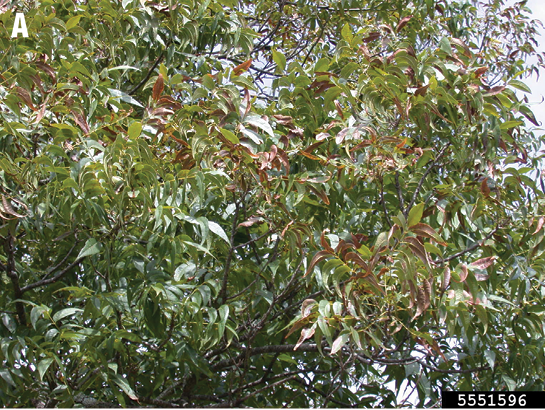 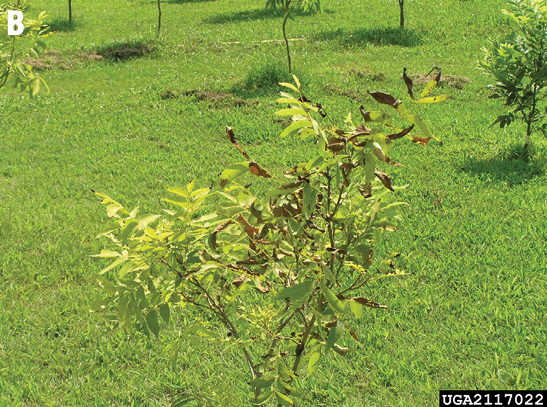 Pecan scorch mites, other diseases, some nutritional disorders, and drought conditions can also cause scorch symptoms that may be mistaken for pecan bacterial leaf scorch. Careful examination of pecan leaves with a magnifying lens can reveal the presence of scorch mites. Drought is more difficult to confirm as a diagnosis. Many university diagnostic labs have the tools necessary to test pecan tissue to confirm a pecan bacterial leaf scorch diagnosis. Samples sent for diagnosis should consist of 10–15 compound leaves showing symptoms of scorch. This service is free in some states; in other states, there may be a small fee per sample. Contact your local county Extension agent or your university diagnostic lab for more information.

Pecan bacterial leaf scorch is caused by a strain(s) of the bacterium Xylella fastidiosa subsp. multiplex. At the species level, X. fastidiosa is capable of infecting over 100 different hosts, including many hardwood trees and many economically important crops, such as almonds, blueberries, citrus, coffee, grapes, peaches, and plums. Researchers have identified numerous strains (distinct forms of an organism) and have described several subspecies within X. fastidiosa; these strains and subspecies are based on genetic and host range differences. In research studies, strains of X. fastidiosa from grapevines and sycamores in Louisiana did not infect pecans. Furthermore, strains of X. fastidiosa from pecans in Louisiana did not readily infect other hosts known to be infected by different strains or subspecies of this pathogen.

Unlike some other pathogens that attack tissue from the outside and require new infections each year, X. fastidiosa resides on the inside of the tree in the water-conducting tissue (xylem). The bacteria persist in the xylem and, over time, multiply and move through the xylem, eventually spreading throughout the tree. As the bacteria multiply in the xylem, they clog the xylem cells and prevent the regular transport of water and nutrients through those cells, leading to symptom development.

Three means of pathogen transmission have been demonstrated in pecans. Graft-transmission of X. fastidiosa through the use of infected scions (Figure 2B) is likely a major source of pathogen introduction into new orchards because pecan cultivars are clonally propagated. The pathogen can also be graft-transmitted through infected rootstocks.

In previous research, pruning did not result in transmission of the pathogen in pecans.

Because there is no way to cure an infected pecan tree, pecan bacterial leaf scorch management focuses on preventing pathogen introduction and spread into noninfected trees and orchards. While the following practices do not ensure prevention of infection, they may help reduce the incidence of pecan bacterial leaf scorch and delay the introduction of the pathogen and disease development in an orchard.

Graft only onto noninfected (asymptomatic) rootstock. Trees to be used for rootstocks should be visually inspected for symptoms of pecan bacterial leaf scorch the growing season before grafting. Rootstock trees with symptoms should not be used for grafting and should be destroyed.

Collect and use scions only from noninfected (asymptomatic) trees. Trees from which scion wood is collected should be visually inspected for symptoms of pecan bacterial leaf scorch the growing season before scion wood collection. Scion wood should not be collected from trees with symptoms of the disease.

Treat scions using a hot-water treatment method. Scions are often purchased or shared among growers or hobbyists. It is not always possible to determine if these scions were collected from noninfected (asymptomatic) trees. In addition, because symptom expression following infection may be delayed or because symptomatic leaves may abscise from trees before the trees are surveyed for symptoms, it is possible to unknowingly collect infected scion wood. In these instances, scions prepared and stored using standard methods can be subjected to the hot-water treatment described below just before grafting. Research showed that this treatment was 97 percent effective at reducing the transmission of the pecan bacterial leaf scorch pathogen through grafting with infected scions and did not affect the grafting success rate (Sanderlin and Melanson 2008).

Collect and use seeds only from noninfected (asymptomatic) trees for nursery rootstock. Trees from which seeds are collected for nursery rootstock should be visually inspected for symptoms of pecan bacterial leaf scorch throughout the season before seed collection. Seeds should not be collected from trees with symptoms of the disease. There are currently no effective seed treatment methods to reduce or eliminate X. fastidiosa from seeds.

Prune infected (symptomatic) branches from trees or remove trees from orchards. Because it is not possible to accurately track bacterial movement within the xylem of a tree and because symptom expression may be delayed following infection, there is no way to know with certainty how far the pathogen has spread within a tree. It may be possible to eliminate a current infection from a tree or to eliminate the pathogen from an orchard by pruning an infected branch or limb or by removing a tree from an orchard. However, pruning and tree removal do not guarantee the absence of future infections in an orchard.

The practice of pruning branches or limbs may be beneficial only if new or limited infections are observed in trees or orchards. This practice may also only be practical if symptoms of pecan bacterial leaf scorch are observed toward the extremities of the trees and not near the trunks. If a new or limited infection is observed near the extremity of a tree, the branch or limb to which the symptomatic leaves are attached should be properly pruned to the branch collar or tree trunk. Pruning cuts should be made as soon as possible after symptoms are observed and several feet behind the observed symptoms. In young trees with recent symptoms of pecan bacterial leaf scorch, the closer a pruning cut is made to the trunk of the tree, the better the chances of eliminating the pathogen from the tree and preventing it from spreading throughout the tree.

The practice of removing a tree from an orchard may be wise in a newly planted orchard (first 3 years) only if a few trees become infected and additional sources of pecan bacterial leaf scorch are not nearby. If numerous trees develop pecan bacterial leaf scorch, it may not be beneficial to remove these trees. In established orchards, it is likely not economically feasible to remove a bearing tree that becomes infected. Tree removal does not guarantee the absence of future infections in an orchard.

Monitor for the presence of vectors and manage populations of vectors. While research has not been conducted in this area in pecans, it may be possible to reduce the chance of pathogen spread by reducing vector populations. Vectors of X. fastidiosa can be detected using yellow sticky traps (Figure 4). These traps may be purchased from various retailers. Insecticide applications to reduce leafhopper and spittlebug populations can then be made when vector populations begin to increase.

Additionally, while other plants are likely not a source of the pathogen for pecan infection, some plants, such as citrus, crape myrtles, grapes, and peaches, attract the glassy-winged sharpshooter. These plants should be avoided in the vicinity of pecan orchards to avoid attracting vectors. If these plants are located near pecan orchards, it may be possible to manage vectors on these plants by monitoring vectors with yellow sticky traps and applying insecticides when vector populations begin to increase.

Melanson, R. A. and Sanderlin, R. S. 2015. Hot-water treatment of pecan scions as a means of phytosanitation to reduce the potential introduction of Xylella fastidiosa, the causal agent of pecan bacterial leaf scorch, into orchards and new geographic regions. Acta Horticulturae 1070:201–209. DOI: 10.17660/ActaHortic.2015.1070.23