Choosing a management strategy is one of the more daunting decisions for beginning forest landowners. A decision facing many landowners today is whether to plant pines following harvest. Advances in pine genetics and enhanced silvicultural methods have made pine plantations more productive than ever. However, severe reductions in pulpwood markets and a diminished logging workforce have brought to question the wisdom of planting pine.

Mixed stands have both pine and hardwood components exceeding 20 percent of the overstory. Mixed-stand management provides an alternative to landowners seeking income from their property while potentially reducing risk. Mixed stands can be managed to provide a diverse timber portfolio if they are large enough to support harvesting operations for both species groups. This can help mitigate risk of volatility in pine or hardwood markets. Conversely, mixing species increases harvesting constraints and does not optimize returns in commercial harvesting. Maintaining a mixed stand can also reduce risks of species-specific pests or pathogens, such as the southern pine beetle or Ips beetles. In addition, mixed stands can create more profitable opportunities for hunting leases, wildlife viewing, and real estate marketability.

This publication provides basic biological information on how mixed stands grow and addresses questions regarding their management. Active silvicultural management of this stand type is relatively scarce in the southeastern United States. Consequently, many recommendations in this publication have been extrapolated from outside of the South. Landowners are encouraged to consult a trained forester before making management decisions because not all species mixtures provide the same economic opportunities.

Mixed stands are commonly found across the forested landscape and develop naturally through forest succession. Today, most mixed stands occur following decline of an overmature pine plantation. In this scenario, the canopy becomes less continuous over time as natural mortality, insects, or previous thinning operations create canopy gaps. Advance regeneration (seedlings present prior to removal of overstory trees) of hardwood species, like oak, hickory, or elm, take advantage of increased growing space and grow into the canopy, producing a species mixture. In the absence of management, pine plantations typically start to transition into mixed stands 40–60 years after establishment.

Species mixtures can also occur from pine establishment within hardwood stands following moderately intensive disturbance, such as blow-down or ice storms. However, this pathway is much rarer than the previous examples of mixed-stand development. In all cases, landowners should be aware that mixed stands are a transitional development stage. Nearly all stands in Mississippi will transition into hardwood-dominated forests given long-term absence of disturbance.

Species composition of a mixed stand determines what forest products can be produced. Landowners may be interested in mixtures dominated by pine, oak, and sweetgum. These particular species grow well in high-light environments, can serve as trainer trees to aid other species in obtain better form and/or growth, and depending on species, may be able to withstand low-intensity prescribed fire after their trunks reach several inches in diameter. Growing mixtures featuring shade-tolerant hardwood species is possible, but these hardwood species are usually less valuable commercially than shade-intolerant species.

Landowners interested in managing for wildlife may prefer species mixtures that optimize habitat for individual wildlife species. For many popular sport species, such as eastern wild turkey or white-tailed deer, maintaining open understory conditions is critical for promoting herbaceous plant species (Figure 1). In this scenario, tree species should be evaluated based on their ability to withstand prescribed fire through adaptations including thicker bark. Landowners managing wildlife habitat should familiarize themselves with requirements of desired wildlife species before deciding which tree species to include in the mixture.

Figure 1. Vegetative response from prescribed fire in a mixed stand.

Mixed stands can be developed on nearly all sites in Mississippi. However, optimal species mixtures will vary by soil type and soil moisture. In north Mississippi, loblolly pine and shortleaf pine are the best conifer options (Figure 2). On all but the driest sites, loblolly pine is the more productive species. Shortleaf pine is more drought-tolerant and can sprout following top-kill from fire as a seedling. Also, the species grows slower than loblolly, which may make it more suitably matched to slower growing hardwoods. 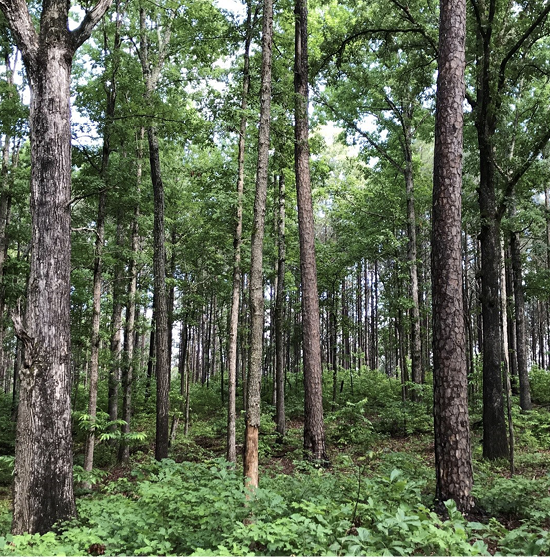 In addition to loblolly and shortleaf pine, landowners in south Mississippi have the option of growing slash pine or longleaf pine. Slash pine grows best on moist soils but typically suffers growth stagnation when stands are under intense competition. Longleaf pine grows well across a range of soils but requires frequent, low-intensity prescribed fire or herbicide applications to encourage development out of the grass stage of regeneration.

Unlike pine plantations, in most instances, hardwood stands will have a variety of species growing side by side. As stated previously, given sufficient time and lack of intensive pine management, most pine stands will eventually transition into hardwood forests. Subsequently, establishing a hardwood component in post-harvest pine stands is not as difficult as the reverse. Problems arise when considering the hardwood component of this stand type, especially the desirability of regenerated species.

Hardwoods are generally separated into two main categories—bottomland and upland—with species typical to each category. Bottomland hardwood forests are typically diverse, with many species growing within a single stand. However, environmental site conditions limit pine establishment on many bottomland sites. Consequently, upland sites are the appropriate locations for establishment of mixed stands. Several species often found on upland sites, including sweetgum, southern red oak, white oak, and others, are compatible with a pine component in mixed stands.

The sensitivity of hardwood species to site conditions is of particular note to landowners interested in establishing mixed stands. Upland oak species are usually capable of survival on a wider range of site conditions than their bottomland counterparts; however, there are limitations, typically related to soil moisture. In addition, upland sites are often better pine than hardwood sites. This, combined with genetic gains made in loblolly pine over the last half-century, results in a species that often outgrows the adjacent hardwood component in mixed stands. Depending on the goals of ownership, shortleaf pine may be a more appropriate species to intermix in mixed-stand management efforts.

Many contemporary mixed stands developed naturally, with no management. In some situations, this lack of management produced a highly valued species mixture. Unfortunately, in other situations, lack of management produced low-quality mixtures that require significant silvicultural intervention if commercial production of wood is desired in the future. Predicting species composition can be challenging. An abbreviated list of factors that contribute to future species composition follows. Correctly interpreting these factors can help determine whether silvicultural intervention may be needed for production of a desirable species mixture. For simplicity, assume a starting point of a stand regenerating post-clearcut.

Even though the previous forest has been removed, it can still influence the future stand through sources of regeneration left behind. Well-known examples of this effect include tulip poplar (seed-bank longevity), sweetgum and American beech (root-suckering), boxelder and other smaller-diameter species (sprouting), and oak and hickory species (wildlife seed caching). A high density of any of these species in the previous stand often results in a vigorous regeneration response post-clearcutting. Sprouts and root-suckers are typically stronger competitors than seed-established regeneration because they have a more developed root system (Figure 3). 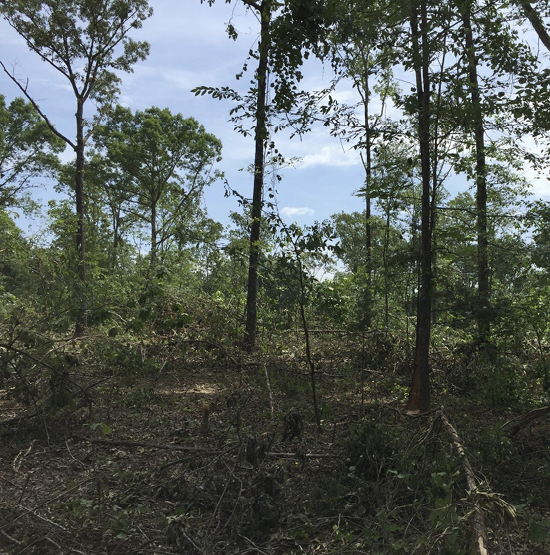 Often, economically undesirable species or trees that have not reached merchantable size are ignored in logging operations (Figure 4). Subsequently, due to the rapid decrease in post-harvest competition, these residual trees gain access to abundant light, moisture, and soil resources and grow rapidly. Residual trees often gain prominent growing positions in future stands if they do not suffer significant damage in logging operations. In addition, these stems are sources of seed and can result in regeneration of undesirable species. 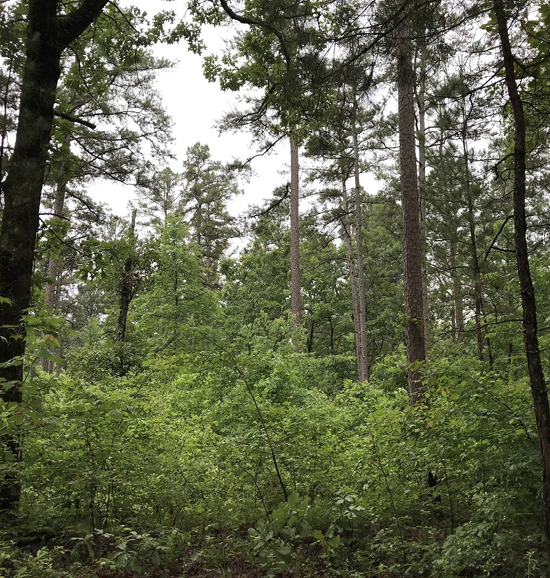 Mixed-species stands can provide opportunity to manage for a wider range of forest products and ecosystem services than plantations. Moreover, the stand type will develop naturally throughout much of Mississippi. Nevertheless, landowners should be aware that not all species mixtures are considered desirable for management goals, and that regenerating a quality mixed stand may require significant silvicultural input. In addition, management of this stand type will not maximize financial returns. Thus, it is important for landowners to prioritize management goals before considering mixed-stand management.